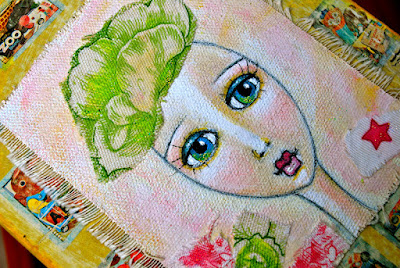 "But I'm Still Here"
Altered Golden Book Cover & Canvas
Ever been in an art funk? When your Muse not only decides to take a hike, but also seems to be giving you the Bird on the way out the door? Yep. That was Me. For what felt like an eternity . . . . So I gave it a rest. For much longer than I would like. Now, I did try to create but every time I did, well, let's just say it wasn't pretty. And yes, perfectly reasonable (and normally rational) adults can have tantrums . . . . I am living proof.
So when I read Christen Olivarez' Letter from the Editor in the latest issue of Somerset Studio, I felt as if she was talking directly to me. She discussed the idea of being paralyzed by perfection (yep) and that when we over-think things (um hum), we can stop ourselves in the process. She underlined this point with a beautiful quote from Julia Cameron: "Art is not about thinking something up. It's about getting something down."
So I did just that. Tried to get something down. I made a little collage. And put it away. I started to scrapbook (which is another subject 'cause it's been years since I've scrapped anything for my own kid). And then threw it away. And then I eventually did what I set out to do in the first place: I played. For reals. I picked up a piece of canvas fabric ('cause it was the closest thing to me), ripped it into a small square and went to town. I didn't even seal my drawing as I normally would before painting because I couldn't be bothered . . . but in the end, I broke the curse. And my Muse is back. Although she is in trouble. Leaving me all high-and-dry like that . . . . 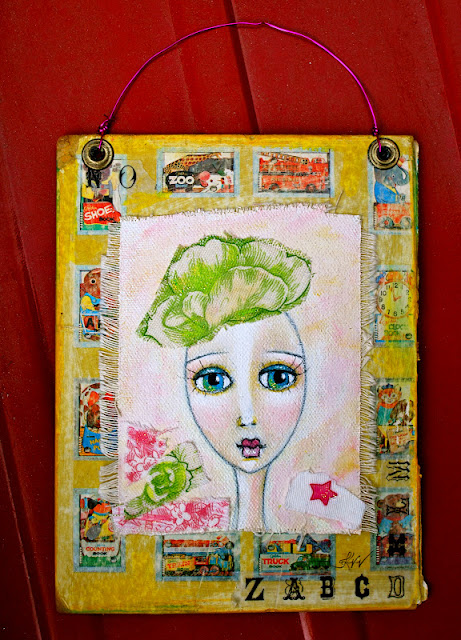 I hate it when my muse deserts me. You seem to have found yours again because this little canvas is adorable! I love her!!

You have definitely found it again. This little canvas is absolutely wonderful! I'm glad you played and got something down and had fun. Had a similar experience this weekend. Decided to just play and experiment with no project in mind to start or finish. A pile of scraps and some recent purchases suddenly turned into a simple project.

This really may be my new fav! I love her. maybe I'll do a Kristin inspired face someday!

Seriously though, it is fab and you're fab and we are all fab!!!

Where is she going? In the mailbox to me? hehe...

Gorgeous! Love the Spring colors in here. The details are sure pretty and must agree with adult tantrums, I have one myself. :-)

Isn't that the truth?! Getting so hung up on details, perfection, having a plan, not wasting time, etc....you name it!

Playing is something we forget to lose ourselves in as adults....so glad you lured your Muse back...this piece is awesome!

Totally love it Kristin... she is awesome... and I love the gorgeous color palette you have used... yes... she is definitely back... I think that is a fabulous lesson for us all... have fun playing... can't wait to see more :)))

It's SO great to know I'm not alone..lol..seriously...I didn't even post what I made over the weekend because I liked my 4 year old's drawing better..the only thing I can do at times like this are make cards...cut and glue, cut and glue.. :) Kristin, this is a lovely piece, bright and creative, it feels fun!...I need to read that editor's letter!

what a lovely art !

Loving your canvas Kristin. You have enough talent not to worry about your muse........what sort of pal is this that can leave you high and dry........ you go girl. Annette x

I read Christen's letter too--and so agree--sometimes I talk myself out of trying something different--just DO it--who cares what it looks like???

So happy you were able to break free with this wonderful piece!

Been there, done that (the art funk). So glad you found your way out with the help of this wonderful piece--I love that you made her on a book cover :)

Great piece, so good to see and your muse back again! I go home at last tomorrow! Hugs, Valerie

I have been feeling this way, too Kristin...last week I just started mod podging and painting in my art journal to see what happened. It is coming along ok. I need to play more!!!!

Thank you for sharing:)

Thank you chibiwow!
I couldn't link to your site, but I do appreciate your visiting me here, xo

I';m so glad Missy Muse has returned - your canvas is beautiful.

Your canvas is so vibrant and fun.
I love the colors, lemon lime whispers spring!
So happy your Muse is back, treat her to something special
; )

Off to read Editor s letter, sounds like a great pep talk
Happy you are back to being you xox

Hi
I am so glad you visited my Blog (Adorn) so that I in turn could visit you (and now your newest Follower).
This post made me chuckle as isn't it so true, when Ms Muse walks out the door and leaves us high and dry. Well I cannot imagine this happens to you very often as I scan your Blog.
This is captivating, it is the expression on her face and your beautiful use of colour.
Wishes
Lynne

There are many times when my muse just hides......needing a rest no doubt and I give in and stop. It always works and I come back fresh and full of ideas.

You came back and created this WONDERFUL hanging. Simply perfect!! (wink!)
x

Very cute! I love how original your art is!

This is a lovely piece of art! What a fabulous way to get out of your funk. I appreciated your description of getting over it, with a few false starts. Honesty is very helpful for others who face a funk once in a while!

Yep, I was in a major creative funk, and I simply *didn't* create for like 2 months (maybe more!). Finally, got into an online workshop that re-sparked my creativity and now I'm good ;).

I canNOT imagine you throwing a tantrum! Seriously! You always seem so cheery and collected when I see you. I guess we're all entitled to a tantrum now and then, but I just can't picture you pitchin' one. Glad you got your groove back ;).

~here's to freeing your mind and playing with your muse...may you continue to create in a fun filled beautiful way my dear friend...be well and much love light and blessings~

Oh my gosh....I love this piece! She is so beautiful and what a funky and fun creation. I can totally relate to the over thinking, perfecting, trying to control it all thing. I wonder if our muses get fed up when we are trying to force them too much, instead of allowing them to flow freely, the way they should? I'm pretty sure mine has said adios. :) Letting go, is so much harder than it should be. I'm glad your muse is back and wow, really creative and beautiful.

Ok, I LOVE this post! The first 2 lines made me laugh hard! And yes, I have been there and know how you felt. Still funny though! But what a great and inspiring post... it's always nice to know that other artist's have been there (we all have) and how you get out of it... and it's usually just like that.... by not taking it so seriously and just play! And I love this piece that came from all this. just wonderful!

I LOVE this....the lettuce on her head is so great and it fits her expression...I can tell you had fun and that shows your muse is there..... 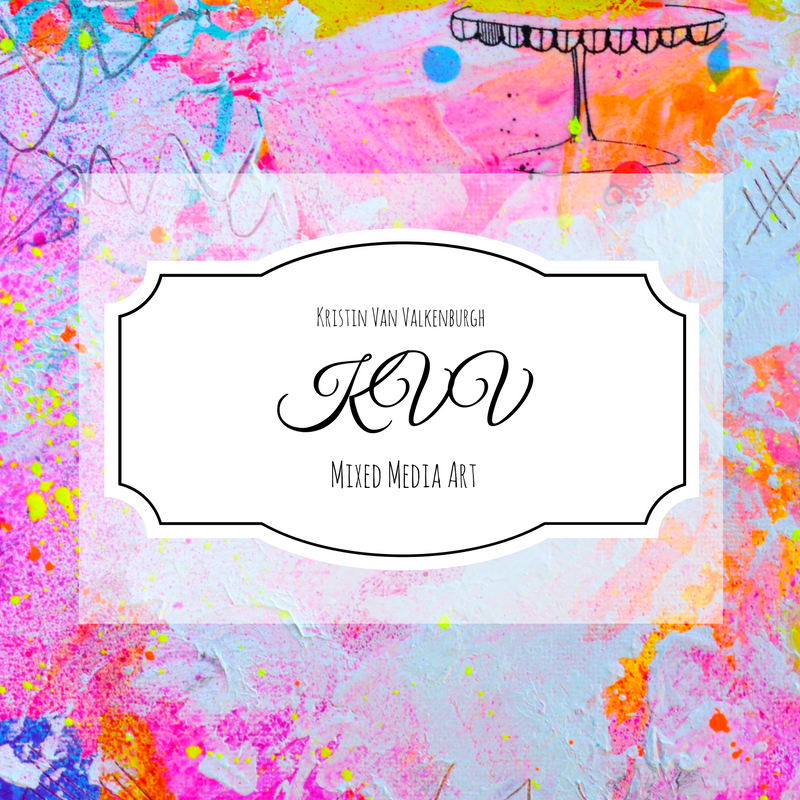 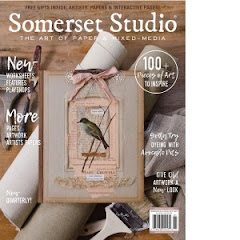 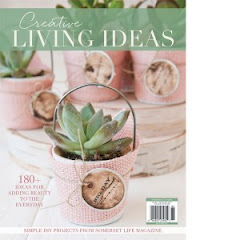 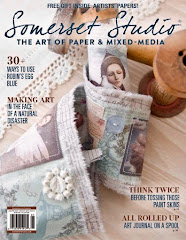 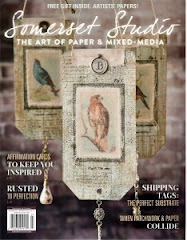 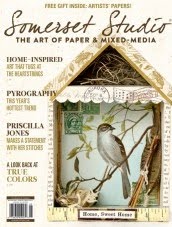 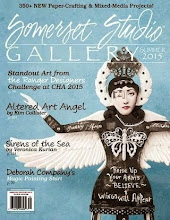 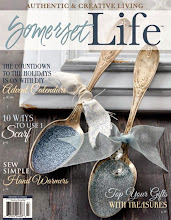 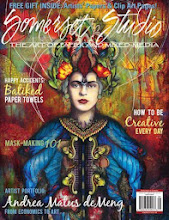 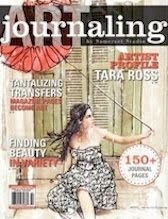 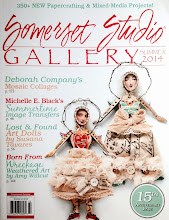 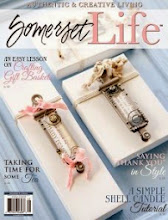 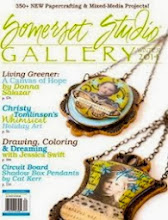 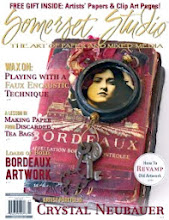 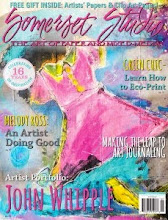 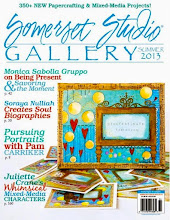 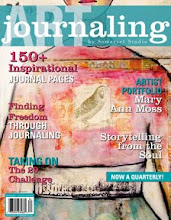 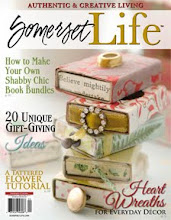 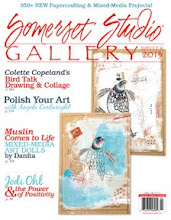 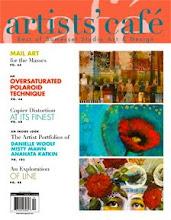 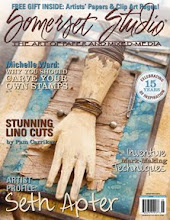 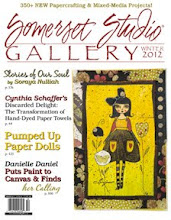 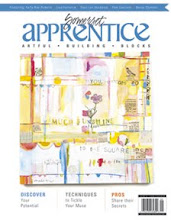 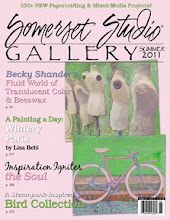 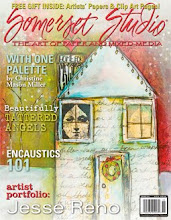 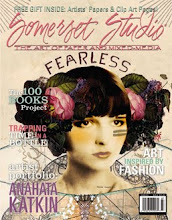 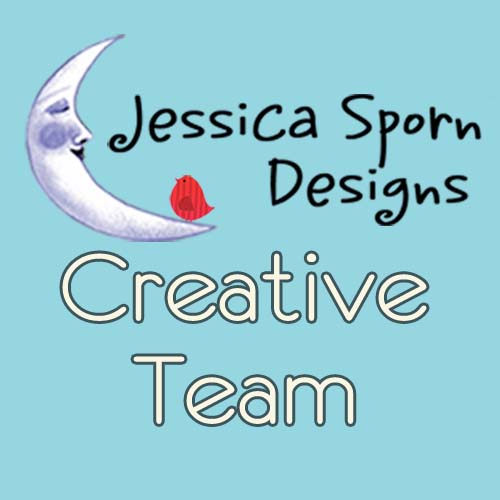 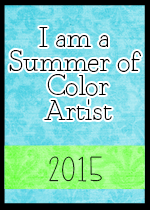